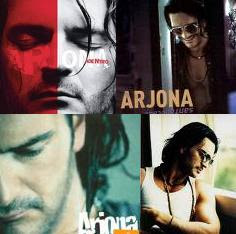 Ricardo Arjona was born in Joconotenango, Guatemala, in January 19th, 1964. He´s a famous singer-songwriter. By the age of nine, he started to play guitar and wrote his firsts songs.
At the age of twenty one, Ricardo released his first album, "Déjame decir que no" in the city of Guatemala. However, he became famous when his second record was recorded, "Jesús: verbo no sustantivo", and millons of copies of this album appeared in the shops.
Something very important which happened his life was that his name appeared in the library where he was studying, and also in a street in Jocotenango.
Ricardo Arjona participated in "Alcanzar una estrella", a series on tv programe. In this programe he had the opportunity to show people listen his songs, "La mujer que no soñé jamás", "El taxista", among others.
In 2006 and 2007, he won two Grammies and one Grammy Latino, for his record "Adentro".
In my opinion is a really good singer-songwriter. Many people like the lyrics of his songs, especially women. His most successful hits are: "La nena", "El problema", "Santo pecado" and "Duele verte".
By Danei
Posted by Danei at 7:21 PM

ok Danei , I read your homework, it´s good and i like the pictures too . Go on practising ...